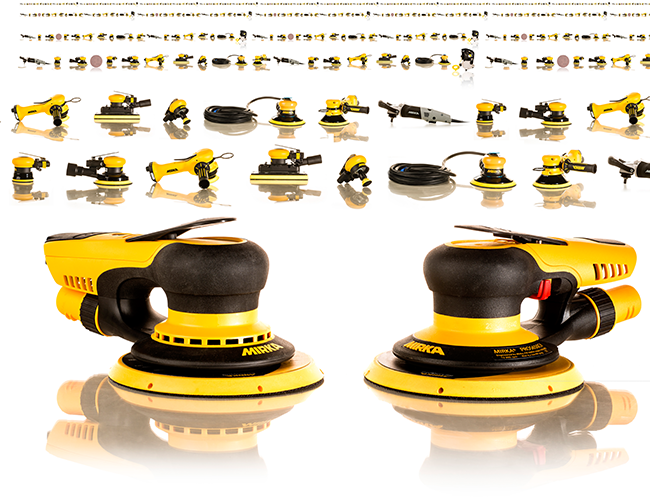 “With Flow Simulation software we simulated the existing design and quickly found multiple locations in the machine where the air flow and thus cooling could be improved. It would have been  impossible without virtual simulation. Using SOLIDOWKRS Flow Simulation we completed the development project in half the time compared to similar earlier projects and we ended up with a much better product.”

KWH Mirka Oy Ab with about 1,000 employees was founded in 1943 in Helsinki. The company’s main product is abrasives and in addition the company develops and produces a wide range of world leading power tools for sanding and polishing. Company needed to reduce the working temperature in an existing electrical sanding machine and also optimization of air flow was previously based on experience and guesswork rather than on the physical facts.

Finnish company KWH Mirka has saved a lot of both time and money using SolidWorks Flow Simulation to simulate airflow during the development of a new fan system for an electrical sander.

“In certain conditions some users had the experience that one of our electrical sanding machines became too warm during operation so we decided to develop a new and more efficient fan system for the machine. Using solidWorks Flow Simulation to simulate the air flow through the machine, we completed the development project in half the time compared to similar earlier projects and ended up with a much better product.”
so says Caj nordström, who is in charge of the development of Mirka’s wide range of world- renowned power tools for sanding and polishing. The tools are used in connection with the company’s main products which are abrasives for sanding and polishing within for example, automotive, boat and furniture industries as well as a wide variety of other types of settings.

Effective cooling systems play a key role for both the work environment and the durability of Mirka’s electric tools since the machines are often used in pretty warm environments its necessary that the cooling systems are very effective so users avoid working with tools that are too hot.

Previously when Mirka was developing a cooling system for a new machine, the development team based on experience more or less had to guess how to make the most effective design, explains Caj nordström: “It took quite some time and meant that we had to make multiple physical prototypes for testing and verifying the cooling capacity of the system. With SolidWorks Flow Simulation in the latest development project, we could quickly simulate and analyze the air flow and optimize the design without the need for a number of physical prototypes.”

Caj Nordström estimates that the development of the fan system was completed in half the time compared to previous similar projects, thus being far more cost effective. “The development project has been a great success. We introduced SolidWorks Flow Simu- lation using few resources. With the software we then simulated the existing design and quickly found multiple locations in the machine where the air flow and thus cooling, could be improved. It would have been virtually impossible without simulation.” He adds that the development team used a single physical prototype of the new optimized design of the sanding machine to prove that the results from the simulations were accurate and that they resulted in a much more efficient cooling as expected.

KWH Mirka also uses SolidWorks Simulation for both static and dynamic calculations of strength during the development of the mechanisms of its random orbital sanders and polishers, where the individual components are constantly exposed to alternating loads. With these simulations, the designs of the mechanisms are optimized both in terms of strength and material consumption.

Recently, KWH Mirka has purchased SolidWorks Enterprise PDM to manage all its technical information. The company is in the process of implementing the system in the department for the development of electric tools.

“We are implementing the PDM system beause we have a growing need to keep track of all of our technical information about products to make sure that we are always using the most recent versions of CAD models and other types of information,” says Caj Nordström.
 

“Simulation brings us much closer to the physical world during the design process. When we compare our solutions to actual physical results, we can see that we have been very accurate in our predictio...