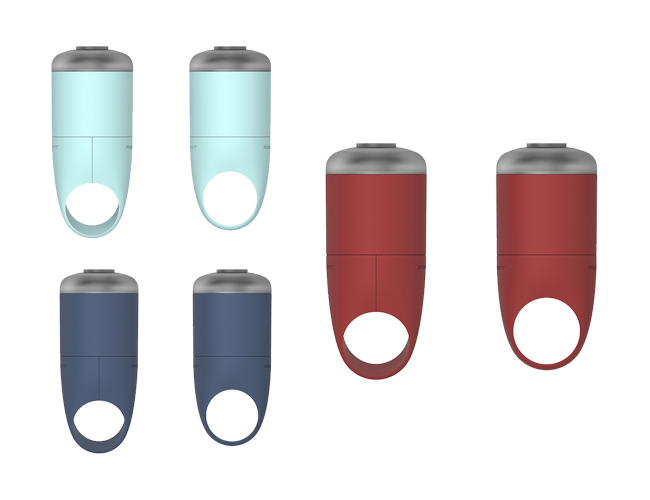 Reelight was founded in 2003 in a small apartment in the Danish town of Aarhus. The idea behind the company was to make magnetic bike lights without the use of batteries. Since its foundation the company has grown to nine employees and has moved to larger premises. Today it is the world’s largest supplier of magnet-based bike lights.

The challenges were how to develop new and increasingly sophisticated products at faster rates, how to communicate effectively without errors with Chinese suppliers and how to create rapid prototypes for assessment of design concepts easily.

Good design combined with smart environmentally friendly technology. That is a brief description of the basic idea behind the bicycle lights from the Danish company Reelight who has been using SolidWorks to develop all of its innovative products. The company has just won (May 2013) one of the most prestigious international design awards, the German reddot “best of the best” award for its newest product Reelight GO , created in collaboration with the Danish design agency KiBiSi.

Recently Reelight became ten years old. The birthday was used to celebrate that the company in just afew years has become the world’s leading supplier of magnetic bike lights. More than one and a half million Reelights have sold worldwide. In Denmark the lights are mounted on about 40 percent of all Danish bicycles.

For two years in a row, Reelight has won the Eurobike Award, which is awarded at the world’s largest bicycle trade show, Eurobike. The prizes were awarded for the products’ contribution to road safety, environmental friendliness and, not least, innovation. Reelight’s products have up to now been based solely on a patented technology where custom magnets mounted on the wheel spokes and on the front or rear fork of the bike generates the electricity needed to power the lights using induction technology. With the GO Reelight, it has developed its first battery- powered product, but the magnets still play a crucial role, as they ensure that the lights turn on automatically when placed in the holders mounted on the bike, and is keeping the two light parts together when they are folded ready to be pocketed.

“We are very proud of the price and both our new product and the design award show that we have done the right thing by expanding our product range into battery-powered lights,” says CEO Kenneth Linnebjerg, Reelight.

The past seven years SolidWorks has played a key role in achieving Reelight’s goal of supremacy in innovative design of bicycle lights and new lighting technologies, explains Kenneth Linnebjerg: “Overall, SolidWorks helped to ensure that we can bring new and increasingly sophisticated products to market faster and it is a decisive competitive factor for us,” he says.

Reelight’s Chinese manufacturers require good technical documentation in order to produce as effectively as possible. Reelight are both designing the products and generating the necessary technical documentation such as manufacturing drawings using SolidWorks. According to Kenneth Linnebjerg this means that the company avoids all the time consuming misunderstandings and mistakes that inadequate documentation could create in the ongoing communication with subcontractors. Linnebjerg adds: “Furthermore, the CAD software improves our efficiency in product development by automatically providing the files that are the basis of prototypes which are produced for us by prototyping agencies using 3D printing.”

Kenneth Linnebjerg also stresses that SolidWorks has played a key part in Reelight’s efforts to streamline the design process at Reelight. The CAD software makes it possible to reuse components from existing products in new products, and also to make fairly accurate estimates of the cost of new products.

”We have just implemented the system, and we use only a small corner of it, so we do not know yet where the road will take us. The system has countless opportunities and we can obviously expand our us...

END_OF_DOCUMENT_TOKEN_TO_BE_REPLACED

"SolidWorks® Enterprise provides the data foundation through which we intend to refine workflows and introduce lean manufacturing initiatives.”...